50 Years of the Southern Skirmish Association:

SoSkAn, The Southern Skirmish Association, is this year celebrating its 50th birthday.  That’s 50 years since four gentlemen took it upon themselves to form a group that has been synonymous with, and at the very forefront of, UK re-enactment since 1968. 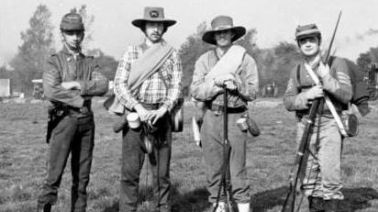 The story of SoSkAn begins in true Civil War fashion.  Our group’s esteemed founders Terry Boniface, Vic Farrer, Bill Hayward and Laurie Watson were members of an American Civil War historical group but were not overly happy with the dictatorial manner of how it was run – and thus they effectively seceded and started their own group, the first event being held 29th June 1968 at a vicarage fete at Staffordshire – a skirmish that involved 20 participants.  At the closing of their skirmish the church offered them a donation, giving the members the idea of charging a fee for their participation in order to secure funds for the association moving forward.  The uniforms used at this time certainly carried a good deal of artistic license, as well as an air of ‘make do’ - research was incredibly hard to come by and the films that inspired many of the original members also left a lot to be desired, when it came to historically accurate clothing.  The society’s network gradually expanded including increased dialogue with reenactors and historians in the United States.  Coupled with the improvement in research methods and materials, the uniforms began to improve in quality whilst the society’s numbers began to grow and grow … offering a big appeal to a generation of people that had grown up watching Western and American Civil War themed movies and epic series such as North and South. 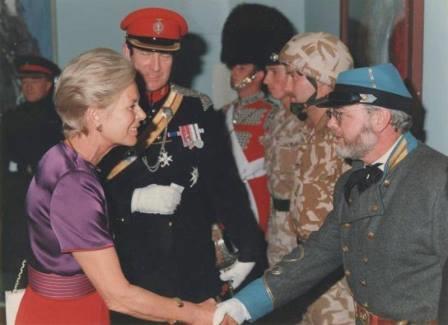 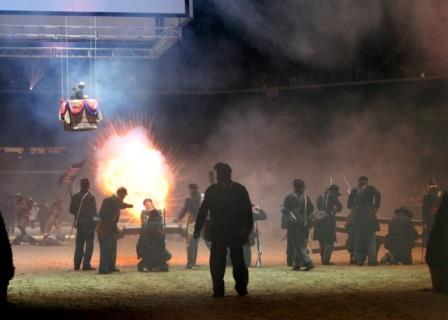 The Artillery bombardment commences at the 2011 British Military Tournament 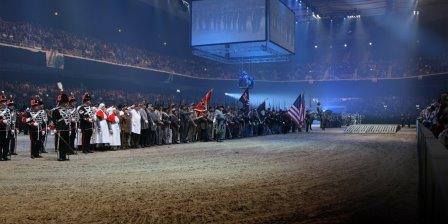 Soskan join the various arms of UK and US armed forces for the final salute at the 2011 BMT.

In the 50 years since formation the Society has bolstered its profile and appeal in numerous manners, even performing intricate rehearsed battle displays in front of a Royal Audience at the Royal Tournament in 1991.  In 2011, SoSkAn again was invited by the Armed Forces to recreate a portion of the battle of Franklin during the British Military Tournament.  We have raised money for Charity in various ways over the years, whilst holding educational charity status ourselves, most notably when 30 hardy individuals marched the Silverstone Half Marathon in hobnailed boots, carrying rifles and full packs; raising in excess of £6000 for the Army Benevolent Fund in 2010.  Additionally we have been hired for numerous pieces of filmwork, even including sound recordings for the Hollywood epic Cold Mountain. 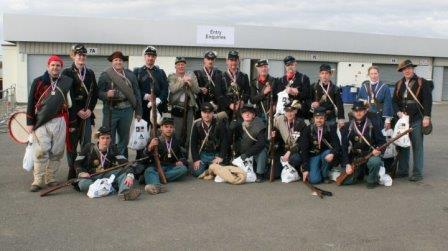 The 19 finishers at the Silverstone Half Marathon – 13.1 miles marched in four hours in full marching order and carrying rifles

We have been a key participator in International events held on UK soil that have sometimes seen American Civil War battles played out with in excess of 1500 soldiers on the field.  The bonds with American Civil War reenactors in both the US and the continent have been strengthened throughout our existence and the society have regularly organised trips in force to participate in major anniversary reenactments stateside and events in Europe.  Through this, some of our members have even gone on to meet their future spouses in the States at such events, moving over there to have huge scale reenactments on their doorstep with the chance to explore the original battlefields whenever they like, much to the chagrin their SoSkAn friends they left behind!!

A recurring question we are asked at many events is “why reenact the American Civil War?”  There are too many answers to list in full.  However the key answer is that the conflict in fact directly involved Victorian Britain in many ways – 100,000s of first generation British immigrants enlisted to fight and the British economy profited hugely through exporting goods to both sides, most notably the Enfield Rifle-Musket, which became the second most used weapon throughout.  Additionally, as touched on earlier, many of our members have grown up with ACW films or series influencing them – from The Red Badge of Courage, through Glory, the 90s epic Gettysburg to more recent movies such as the Lincoln and Free State of Jones.  There is also a draw for those with an interest in Politics – given that its causes and effects still have such an incredible influence on modern day America over 150 years on.  Finally, some members have even been born into the society and thus re-enactment, with the diverse and unique education the hobby and members of our society offer meaning they’ve stayed and now play important roles themselves; some even now in their 30s themselves and bringing their own children along.  The family appeal is often a draw, it’s not uncommon to see three generations of one family represented and portraying diverse authentic roles. 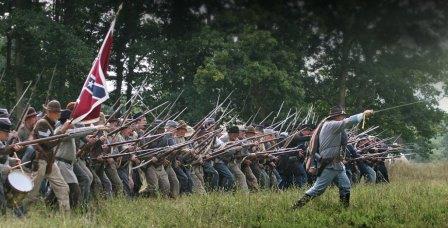 Both Union and Confederate Battalions Charge into Battle

To celebrate our 50 years, we will be having a huge gathering of members old, current and hopefully new at Military Odyssey, Kent County Showground on August Bank Holiday this year – where we will indulge in a great banquet of period food, maybe some drink if Army Commands allow, and partaking in an authentic singalong around our fires, harking back on a rich re-enactment heritage and honouring valued members that are sadly no longer with us.  If you are a former member reading this and would like to be involved, please do contact us via our website www.soskan.co.uk, on Facebook @SouthernSkirmishAssociation or Twitter @SoSkAnACWLH .  Additionally, if your interest has been sparked by anything written here, please also get in touch as Billy Yank and Jonny Reb are always looking out for more great comrades and civilians.

A solemn moment in 2015, as Soskan portrayed the Confederate surrender at Appomattox Court House to commemorate the 150th anniversary of the end the American Civil War.

With great thanks and credit to Roy Daines, Terence Boniface, Craig Semplis and Paul Mitchell for their fantastic photography recording SoSkAn throughout all the years.