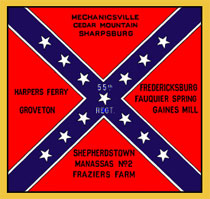 The 55th is one of the oldest regiments within the Southern Skirmish Association, having been reactivated in 1979. Although primarily from the south & south east of England, It draws it's membership from all over the United Kingdom, as well having an honorary member in Virginia whose ancestor was in the original 55th.

The 55th aims to represent an historically accurate 'mid war' (August 1863) company of Confederate infantry, recovering from and being re-equipped after the disastrous Gettysburg campaign. Today, commanded by a 1st Lt, the 55th is part of Browns Brigade, under the command of Colonel Derek Turner-Potter, an American Civil War re-enactor of some 25 years experience. The brigade is broken down into two battalions of infantry, an artillery battery, and a contingent of cavalry. The 55th is the first regiment of the 1st Battalion, the battalion being commanded by another veteran American Civil War re-enactor, Major Dave Gibson, and fights alongside the 17th Virginia Regiment.

The regimental image is based on fact and reasonable assumption. After Gettysburg, the regiment was supplied with new uniforms from the Richmond Store. This is reflected in the so called Richmond No. 2 Pattern jacket, in "British" Blue/Gray. The regiment had also, by this time, standardised it's weaponry, to the 1853 Pattern 3 Enfield rifle musket, the weapon we carry today. For new recruits, the regiment will also allow use of 2 band Enfield muskets, and a limited number of flint lock muskets with pan guards. All other items of clothing, accoutrements, and camp utensils are of 1861-1865 period, and are a personal choice.

New recruits to the 55th are required to obtain a reasonable level of authenticity in dress and proficiency of drill within a year of enlisting. The regiment will offer all the support, advice and contacts to help the new recruit achieve this.

Ladies are welcome to take part as either members of our 'Soldiers Aid Society', or as combatants in the firing line. Members of the regiment are renowned for their friendliness and approachability. During the evening, everyone gathers around the camp fire, imbibing in the 'oh be joyful', 'pop scull', and recount the days, and past deeds. A good singing voice is a great advantage, as the 55th is well known for it's camp song singing, especially, the famous Confederate tunes "The Bonnie Blue Flag" & "Dixie".

We also have our own web site, which you are welcome to visit. We look forward to hearing from you.

A History of the Regiment